PNB fraud worth Rs 11400 crore and it highlights.

- February 19, 2018
The whole nation is watching as another gigantic fraud has hit. This time the fraud has hit the banking sector. This time it is the new Vijay Mallya of India. Well the whole nation has now known the name of Nirav Modi and Mehul Choksi. They have been accused of causing frauds to the bank. They did it cleverly. It is possible that they got hint that a FIR could be lodged against them and thus before that they left the country. So let's discuss in short what actually happened-
1.On 29th of January, a Punjab National Bank official from Mumbai branch filed a criminal complaint with Central Bureau of Investigation (CBI) against 3 companies and four people including Nirav Modi and his uncle Mehul Choksi. 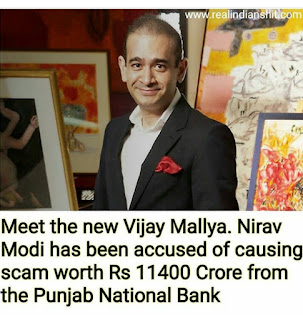 2.The case was registered saying that they had defrauded the bank and caused a loss of Rs 280 crore.
3.The fraud was caused with the help of 2 staff of the Mumbai PNB branch. They helped him in getting "Letter of Undertaking"(LOU).
4.So now the LOUs were used to obtain short-term credit from overseas branch of the other Indian Banks.
5.Then the PNB sends via SWIFT- banking message service that PNB gurantees the amount. But they did not take any collateral.
6.Nirav Modi used a technique which is known as the Ponzi Scheme. Basically it is a fraudulent scheme in which a new LOU is taken to pay the amount for the first LOU. But he did not pay any of the amount of LOU.
7.The LOUs were rolled over since 2011. But now the new official declined any new LOU saying that there was unauthorised transaction.
8.So after the FIR was lodged, various raids were conducted and property and jewelry worth Rs 5760 crore has been seized.
9.Till now three person have been arrested.
10.Though it is expected that other then the PNB, the State Bank of India and the UCO bank may take a hit from this. Also the shares have declined.
11.Earlier Nirav Modi and his family had left the nation in the first week of January 2018. Nirav Modi was born in Belgium and is a diamond tycoon.
12.Nirav Modi has his stores in over 16 nations. But the big point is that he had changed his nationality to Non Resident India(NRI).
But the thing to consider is that if such kind of fraud keeps happening then the trust of a common citizen would come down. People with high approach with the banking sector would take loan of huge amount and leave the nation. This would only encourage other people to fraud more and more. While on the other hand a common citizen has to face various troubles to get a loan. This should stop as these are not the sign of a country running towards a developing status. Firstly Vijay Mallya and now Nirav Modi, they must be brought back and should face justice!
News