- January 16, 2018
Once a great man said, "there is no age of learning". Thus knowledge is one of the greatest gift that mankind can possess. It is the only thing that cannot be stolen. So here we have shared a few of astonishing facts: 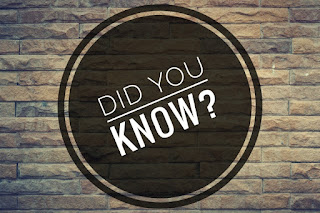 1.The world's best selling flavor is chocolate beating vanilla and strawberry.
2.The blood of grasshopper is green in colour while that of spider is colourless.
3.The Black Mamba is the fastest snake on earth.
4.The colour of Facebook is blue because it's founder Mark Zuckerberg suffers from colour-blindness.
5.There is a place in America known as Area 51. It is totally kept secret and it is said that there have been alien sighting in the area.
6.Purchasing air plane tickets while browsing in incognito mode will lower the price.
7.Playing video game is known to increase your sudden co-ordination dealing power.
8.A teaspoon of honey is actually the lifetime of 12 bees.
9.Recently in 2017 it was found that North Korea accidentally hit one of its own cities while testing a failed missile.
10.The most common emotion experienced in dreams is anxiety.
11.Ants are found on all of the continents except Antarctica.
12.The inventor of Rubik's cube, Ernorubic took one month to solve it before launching.
13.Fuel Tank of every Royal Enfield is hand-painted by only two artists from Chennai(India).
14.The longest car in the world was built by California custom car guru Jayohrberg. The car is 100 feet long.
15.The sun is not made up of any of the three state of matter-solid,liquid,gas. But is made up of the -fourth state of matter called "plasma".