- January 23, 2018
Snakes are elongated, legless, carnivorous reptiles of the suborder Serpentes. Though most species are non-venomous and those that have venom use it primarily to kill and subdue prey rather than for self defense. Non venomous snakes either swallow prey alive or kill by constriction. So that's enough. Lets find some interesting facts about the dangerous animal.

1.There are about 3600 recognized species of snake all over the world.
2.Snakes live everywhere on Earth except Ireland,Iceland,New Zealand and the North and South Poles.
3.Of the 725 recognized species of venomous snakes worldwide, 250 can kill human with one bite.
4.The fear of snakes is known as Ophiophobia or  Herpetophobia. It is one of the most common phobia and around 1/3rd of all adult human suffer from this fear.
5.The six deadliest snakes on the planet are Saw Scaled Viper, King Cobra, Tiger Snake, Inland Taipan, Faint-banded sea snake and Black Mamba. 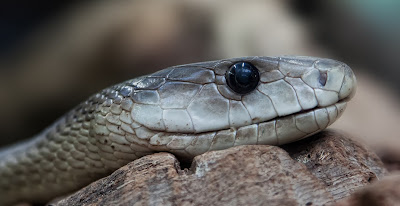 6.Animals like Mongoose are immune to snake venom.
7.The heaviest snake in the world is the Anaconda. It can swallow animal as big as the size of deer,goat as well as cows too.
8.The Death Adder snake has the fastest strike speed among all snakes. It can strike within the time of blink of an eye.
9.The Black Mamba is the fastest snake on Earth. It is found in Africa.

10. The Spitting Cobra can spit venom on its prey from a far distance of few feet.
11.On an average a snake requires meal about 8-30 times per year to stay healthy.
12.Snakes cannot chew food. Although they do have teeth but it is not used for chewing.
13.Snakes do not have ears. So next time you can amaze your friends about the truth when a snake charmer tries to play the music.
14.The Reticulated Python is one of the longest snake on Earth.
15.Snakes live on an average from 4-25 years depending upon the species.
16.The King Cobra is the only snake that builds a nest. It also takes care of its egg until they are hatched.
17.The flying snakes cannot actually fly. They just glide from one place to another.
18.The most number of death caused due to biting of snakes are in India.
19.The venom of snake is used to make anti-dote for its cure.
20. Herpetology is the study of snakes.

So we hope you would find these nerve-chilling information amusing!
Facts