- January 30, 2018
Cricket is one of the most popular sport played and followed in the Indian Subcontinent, Australasia, Great Britain and Ireland, Southern Africa and the West Indies. Although the game has its origin starting back in 16th century but it become popular worldwide in the late 20th century. With millions of viewer of the sports, this game has now become one of the most watched sports in the world. It is even considered as religion in the Indian Subcontinent. Cricket has many interesting facts. Some of them are-

1. Lala Amarnath is the only bowler to dismiss Don Bradman hit wicket in Test Cricket. This happened in the 1948 Brisbane Test.
2.India is the only country to win the 60 over, 50 over, 20 over world cup.
3.The lowest economy for a bowler in Test match who bowled at least 10 or more overs is Bapu Nadkarni of India. He bowled 21 consecutive maiden overs vs England at Chennai at an economy rate of 0.15 per over.
4.Jim Laker and Anil Kumble are the only two bowler to have taken 10 wickets in a Test inning.
5.The first official Test match took place on 15-19 March 1877 between England and Australia. 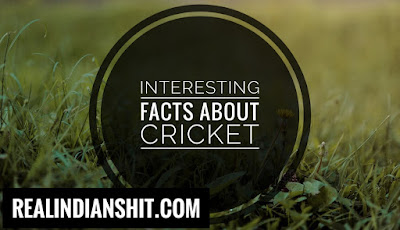 6.Australia won the first test match by 45 runs in 1877 against England. Exactly after 100 year, to celebrate 100 year of Test Cricket once again a test match was held between Australia and England. Luckily, Australia again won the test match by 45 runs.
7. Mahela Jayawardene is the only batsman to have scored centuries in both the semi-final and final of a World Cup.
8.Courtney Walsh is the player with the most number of not outs in Test cricket.
9. Sanath Jayasuniya has taken more wickets in One Day International matches then Shane Warne.
10. Chaminda Vaas and Rashid Khan are only player to take 8 wickets in an inning of One Day International match.
11.Peter Siddle is the only bowler to take a hat-trick on his birthday.
12. Shoaib Akhtar is the fastest bowler in the world when he clocked the ball at speed of 161.3 Kph in an ODI against England in 2003.
13. Ellyse Perry of Australia have represented Australia both in Cricket World Cup and FIFA World Cup.
14.England who are regarded as the originator of cricket have never won a 50 over World Cup.
15. Brendon McCullum has the record of scoring fastest century in Test Match.
16. Graeme Smith of South Africa is the only player to captained a team for more than 100 Test matches.
17. Mahendra Singh Dhoni is the only captain to have won the ODI World Cup, Champions Trophy, and the T-20 World cup.
18. Saeed Ajmal has never won a Man of the Match in One Day International Cricket.
19. The fastest over to be bowled in a T20 match is by Shaun Tait of Australia against Pakistan.
20. AB de Villiers has the record of scoring fastest century in ODI Match of just 31 balls.
21. Yuvraj Singh of India and Herschelle Gibbs of South Africa are the only players to hit Six Sixes in an over in a T20 World Cup and ODI World Cup respectively.

Thus this were few interesting facts about Cricket.
Facts